Use from the command line with the dawa command: 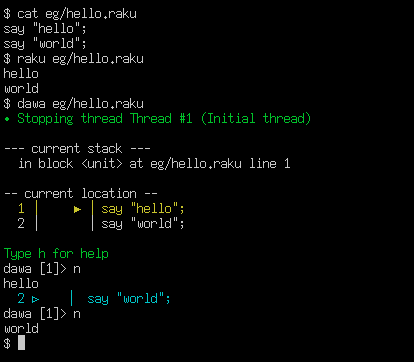 Use from within a program with the stop statement: 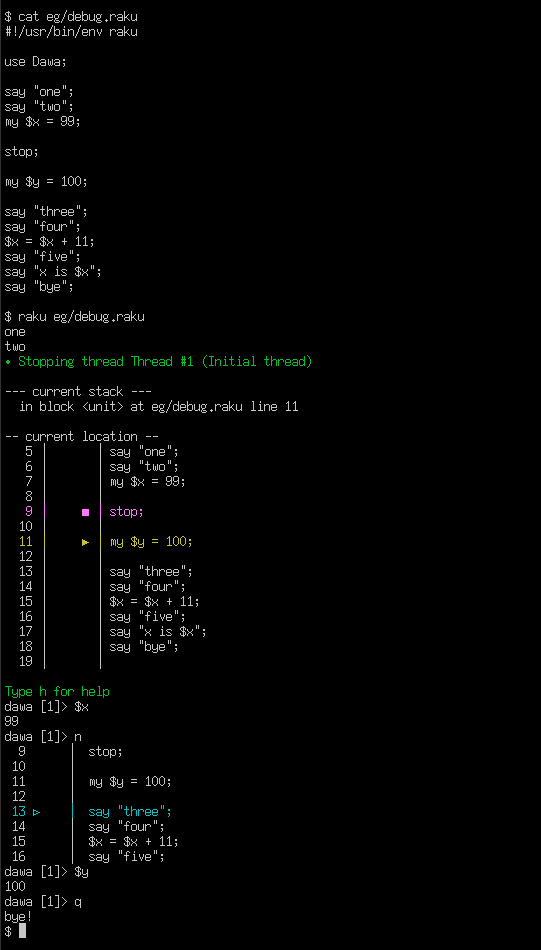 Dawa is a run-time debugger for Raku programs.

It exports one subroutine: stop, which will pause execution of the current thread of the program, and allow for introspecting the stack, and stepping through subsequent statements. It also supports debugging of multi-threaded programs.

Importing Dawa adds extra ops to the AST that is generated during compilation. Specifically, it adds at most one extra node per line. There is a significant perforance penalty for this, as well as a risk that your program will break. Patches welcome!

The functionality of dawa is inspired by Ruby's pry and Python's pdb.

After stop is reached, a repl is started, which has a few commands. Type h to see them. Currently, these are the commands:

Anything else is treated as a Raku statement: it will be evaluated, the result will be shown.

Breakpoints can be set with b, for example:

As shown above, breakpoints are indicated using ■ and are not thread-specific. The triangle (▶) is the line of code that will be executed next. The [1] indicates that this is thread 1. The [1] in the prompt indicates that statements will currently be evaluated in the context of thread 1 by default.

In Raku, there can be multiple statements per line, and multiple "statements" within a statement, which makes it tricky to debug a program by stepping through "statements" or stepping through "lines". Dawa has a number of heuristics for when to stop, but the idea is to stop at most once per line and at most once per statement. Typing "n" may sometimes stay within the same block of code, if a statement containing other statements spans several lines. The display will indicate the block of code containing the statement that will be executed.

If several threads are stopped at once, a lock is used in order to only have one repl at a time. Threads wait for this lock. After either continuing or going on to the next statement, another thread that is waiting for the lock may potentially become active in the repl. i.e. "next" advances to the next statement in any thread. To stay in the same thread, use "step".

Note that in this situation thread 7 continues to run even while the repl is active. To also stop thread 7 while debugging, you can add a breakpoint (since breakpoints apply to all threads).

The eval command can be used to evaluate expression in another thread. For instance, eval 7 $i will evaluate the $i in thread 7.

The ls command can show lexical variables in another thread. Note that only variables in the innermost lexical scope will be shown.

The defer command can be used to switch to another stopped thread. Here is an example:

When multiple threads are stopped, defer will switch from one to another. For instance, the example below has eg/defer.raku, with threads 7-11 stopped, as well as thread 1. After looking at the stack in thread 1, typing d 8 will change to thread 8, and subsequent commands will run in the context of that thread. (also note that if a lot of threads are stopped at the same line of code, they are shown in a footnote)

The word dawa can refer to either medicine or poison in Swahili. In the latter sense, it would be used to describe bug spray, i.e. a debugger -- but hopefully it'll also help be a cure for any ailments in your programs.

The readline history is stored in DAWA_HISTORY_FILE, ~/.dawa-history by default.

Since this relies on undocumented behavior, it could break at any time. Modifying the AST may also cause your program to behave in unexpected ways. It may be possible to improve this once the AST work in Raku is available.